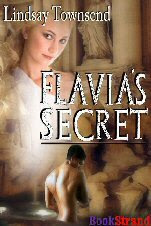 Flavia's Secret has been getting some good reviews lately! It's just been voted Best Book of the Week at The Long and the Short of It, where Cherry Blossom said:

"The unusual time period gives the story a hue of fantasy, but the plot, the character's reactions, the motivations are solidly grounded in reality—both in the psychology of the characters and in the logic of the historical time. And Lindsay Townsend populates her ancient city with a colorful cast. Even the most minor characters are given due attention and spring to life for whatever short part they are called to play. The more important ones are unforgettable. Lindsay excels at adding the right small touch to make each one come to life and be remembered.

"Flavia's Secret is also an emotionally satisfying read. The story pulls the reader in to share the events and to empathize fully with the main characters. It is impossible to put it down once you've started to read it. Moreover, Lindsay Townsend has achieved what all writers strive for—the reader will wish the story would go on forever."

"Lindsay Townsend has thoroughly convinced me that I need to go back into time and become a scribe in ancient England. I lived and breathed Flavia’s yearnings and love for Marcus throughout the pages of Flavia's Secret. Marcus was harder to read but no less important. His status as a widower afforded him the ability to try and stay untouched and out of reach of clinging females. I smiled when the one female who wanted to remain aloof from him was able to change his stance on love and worm her way into his heart.

"Releasing as an ebook first and then a print book later this year, Flavia's Secret is a passionate historical romance. Set in ancient England during Roman rule, I enjoyed reading about these two wonderful characters as well as the setting and town in which the novel took place. Marcus and Flavia were perfect for each other and this book was the perfect read for my ancient history loving soul. Thumbs up Ms. Townsend! I loved every word of Flavia's Secret!"
Posted by Lindsay Townsend at 09:03