Morcar the Northern Earl and his Captive - OUT TODAY! 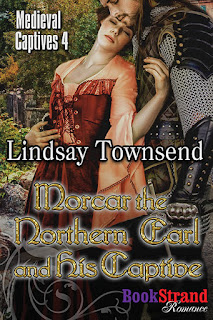 OUT TODAY
Morcar the Earl is a pagan, hated by the Norman Bishop Cyril. Cyril and his bastard son Gaspar plot to unseat Morcar and kidnap his son Thorfinn to raise as a puppet manipulated by Cyril. Morcar is overcome and flung into a cave chained to a young woman, the witch Hemlock. Hemlock has herself been betrayed by Gaspar, who had forced her to be his mistress and then abandoned her once she became pregnant. Hemlock has just lost her unborn baby and is highly distrustful of men.

As a pagan, Morcar believes in many gods and worships the ancient stag god, whose horned tattoo he bears on his arm. It is partly for fear of the god that Cyril’s men dared not murder him, instead manacling him to Hemlock and leaving them both to starve. Can they work together to escape? Can they recover Thorfinn? In the end, what future can there be between an earl and a witch? A BookStrand Mainstream Romance.

Fall of the Year, 1133, Northern England
Someone petted his hair. At least he still had a head, although it felt like a splintered log, which Morcar decided was better than the alternative. But what had happened?
Without opening his eyes, he flexed his fingers and toes, a rush of gratitude sweeping through him as he realized his limbs were also still attached.
And they may not have been.
A memory fell into him like a striking hammer on an anvil. Sudden fist and knife blows from behind, from unseen unanticipated enemies, wild fighting, his son—
Morcar reared up with a shout. The slim fingers petting his hair pushed him back down.
“Your lad is alive,” a voice breathed by his ear. “Alive and whole. The church-men took him. Sleep.”
“Do not order…”
The hand resumed carding through his hair and Morcar wallowed back into unconsciousness.
* * * *
Later he blinked again into wakefulness. His brains no longer felt to be seeping from his skull and his shoulders burned, which he assumed was an improvement on the hollow ringing that had throbbed through his body earlier. Shifting slightly, he forced his eyes open wider, seeing an orange, flickering glare against a black backdrop. Is it night or am I underground?
“Sage tea. Want some?”
Jerking aside, Morcar rolled onto his back and yelped, his vision blurring afresh for an instant.
“You have grazes and knife cuts and deep bruises down your spine but you can move so you will heal up tight. Tisane?”
He smelled the fresh, head-clearing sage tea, then, and watched a cup wobble in out of the gloom in front of him. Squirming onto his side, Morcar tried to clasp the cup and failed, tried again and succeeded.
He groaned as the hot drink almost scalded the back of his throat and then thirstily drained the rest of the cup.
“More?” the voice suggested.
“Please.”
His clearing vision showed a pair of startled hazel eyes and a heart-shaped, delicate face, framed by a melee of tangled tresses. The spiky brown hair looked surprisingly pretty on this urchin, though he had only seen short hair for women on female prisoners before. But what was he rambling about? Focus. A girl. My nurse is a girl. Her brilliant eyes reminded him sharply of Maud, his wife. My wife! Mother of our son. Thank the Gods she died in her sleep three winters past, at peace and ready to join the old ones. He could not have borne her suffering, else, or her knowing that their child had been stolen away.
Thorfinn, their son. Small and dark-haired like his mother, with a gap-toothed grin and a low, chortling laugh. Thorfinn, with his secret bedtime toy of a raggedy cloth robin and his favorite bright red boots. Named for the God Thor and Maud’s father, Finn. Five years old and already a fearless horseman and a merry, good-natured soul who would share his supper with any who looked hungry. Thorfinn would be a generous lord, leading his people with a high heart. Unless the church-men corrupt him. That is why they kidnapped him, to act as regents in my—his—lands and to raise him as they see fit.
Remembering Thorfinn’s wild sobbing as the bishops’ men took the boy away was the worst sound he had ever heard. Grief bit into his lungs, harsh as a Viking blood-eagle, and Morcar choked.
“Sit up, please,” the girl beside him coaxed. “You will breathe the easier.”
“Thor’s hammer! Do not order me—” Morcar’s rasped complaint subsided into a new bout of coughing. The wretched girl seized the advantage. Hauling him up under his arms like a bag of tools, she dragged him into a sitting position, bracing his back with a knobbly knee. Another cup of sage tea appeared and Morcar drank it, scowling at his rescuer. She was small and prickly, like a hedgehog, if such a creature ever dressed in a faded, ruby-colored gown and with grubby bare feet.
“My name is Hemlock.”
At his stifled snort, the girl flicked her bangs back from her forehead like an irritated mare shaking its mane and went on, “I am a hedge-witch, though by no means as powerful as Elfrida, Magnus’s wife.”
Morcar nodded his understanding, feeling a little ashamed now of smirking at her unusual name. The church-men disliked witches nearly as much as they disapproved of pagans.
“You follow the old ways?” he asked, wondering where they were.
Hemlock’s answer had him twisting round to stare at her. “Always. After my parents died, my greedy brother sold me to Gaspar, the bishop’s son. He baptized me by force and re-named me Mary. He cut off my long hair and sold it. I worked in his household for two years. Despite my protests and distaste, he kept me as a mistress until I got with child because I no longer possessed the herbs to make a pregnancy-stopping tisane. Then the pious bishop’s son called me a whore and cast me out.”
Hemlock stopped speaking, the sound of her quickened breathing very loud and echoing faintly. We are in an enclosed space, then, possibly close to the sea from the faint tang of salt I can smell and taste in the air.
“Why should Gaspar do that?” he asked, feeling still very slow and stupid as he caught up with Gaspar’s casual cruelty. To shear off a woman’s glory, her hair and then sell it, and worse, to throw her from his household when she was pregnant—Morcar shuddered, strongly, once. Children were a gift from the gods. “Why?” he asked a second time.
“He wants no bastards,” snapped Hemlock. She had gone pale, white to the lips. In the dark of the cave her face hung beside his like a death mask on a pole.
Posted by Lindsay Townsend at 13:57