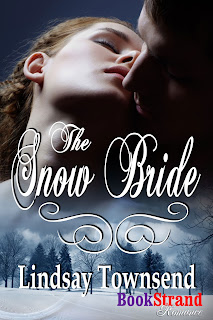 Here's a new excerpt from my medieval historical romance, The Snow Bride. The hero and heroine are in a tower belonging to their enemy, the necromancer.


Making torches, lighting them, took some little time. Magnus could sense Elfrida’s tension and almost see her fears tearing at her like the harpies preyed on their hapless victims in the old tales that he had heard around campfires in Outremer. She stayed within the tower, calling encouragement to Christina and praying aloud, “To cleanse this space,” she told him. She did not attempt to move farther than the few steps they had come from the threshold, for which he was grateful.
“Your sister must be sleeping deeply,” he said when she fell silent and despondent after no replies. “It is the time of winter dark and solid slumber.”
“Or she is drugged,” Elfrida answered.
Once he spotted her gazing at him, a cool, farsighted, assessing stare. Where he considered pits and traps, she concerned herself with magical dangers. He knew she felt responsible for his safety, a strange and queer reversal of nature to him, but one he accepted that he could not shake her from.
All will be better with more light, he told himself, fending off a vague feeling of being watched.
finally brought two spitting torches. Magnus told the youth to keep up and took a torch from him. “Do you stay here?” he asked Elfrida.
She shook her head—he had not expected otherwise—and he put her between himself and Baldwin. Leading the way, Magnus began to pick a careful path across the nails and snares and wooden stakes, walking steadily and lifting his feet high. All the while, puffing like a small, furious dragon at his back, he could hear Elfrida and sense her taut, barely reined-in impatience. She fairly bristled with it. Not far and all will be well, he wanted to say to comfort her, but he said nothing, for they had reached the stairs, and it might not be true.
Gray, narrow, worn, and unlit, the stairs were also slimy on certain treads. Spilled oil or melted candle wax? he speculated, calling out softly in the old tongue and his own dialect, so would know, “Grease, here, step over.” He did not lower his torch. Some things were best left as a mystery.
“Christina, you are safe, beloved. Walter is waiting for you, and all is prepared for your return.”
Elfrida was becoming more urgent and desperate in her wishes. He longed to shield her from this trial but knew it was impossible.
She is a warrior of magic, besides, and a warrior always faces things. She would never forgive me if I kept her out of this.
Yet it was so ponderous, step after step, climbing in the dark, with the stair walls and roof feeling to close in around them, pressing down and choking...
Unless that is just me. Since early youth he had loathed shut-in places, which was why in any siege he had always volunteered for any digging or mining. Now the disgusting, spineless fears of his boyhood shook down the backs of his legs.
If Christina is dead, will Elfrida blame me? No, she will not..
He trod on an object that cracked and slithered beneath his peg foot. He checked the cry bubbling in his throat and kicked the unknown thing away, down the stairs. He heard it flopping into the darkness and vowed to burn the whole tower with fire once they were done.
If Christina is dead or alive, will Elfrida return to her village? Will she want to stay there? Ask her, man, and find out!
He was wary of asking and at the same time eager to ask. As much as Elfrida wanted to see her sister, he wanted to know her mind.
It is my future. Have the stakes ever been so high?
He ran up three more steps and reached the first floor. The staircase continued higher, but now there was a tiny, cramped passageway, again unlit, and at its end, a door.
A blue door, he realized, hearing Elfrida’s gasp of recognition. He spun about and gripped her shoulder tightly, in a gesture of warning and support, then let her go.
He reached out and touched the door with his stump. Elfrida said nothing, did not try to stop him, but he glanced at her for confirmation.
She nodded, her own hands clenched in tight fists, her face unreadable.
“.” He handed the lad his torch and set his shoulder to the door, drawing out his knife—better a knife than a sword in such close quarters.
Surprise was impossible, for if there was a guard, he must have heard their plodding trail, so Magnus called a final warning.
“Release your prisoners unharmed and you shall not be injured or killed. Yield now.”
He pushed on the stout wood, astonished to find the door unlocked, and entered.

Also a sequel, 'A Summer Bewitchment'

Love the characters and the lively dialog. Great message of love, acceptance and overcoming 1st impressions. Must read for that enjoy good writing and Historical Romance

This is a cracking book. I loved the fact that Magnus is a real man, not some fantastic alpha male. He suffers appalling disfigurement from his time in the Crusades but bears up emotionally, putting his responsibility to his group before himself. I just willed him to do well all the way through.

In technical terms, I also thought it a great decision to have the story set in deep midwinter. The desolate landscape resonated with his sense of self.

Thanks, Linda, much appreciated. I found that writing it around Christmas and the winter solsitice gave me darker, older forces to draw on. I found it inspiring.

Lindsay, this looks like a wonderfully suspenseful read. I love this kind of writing--you always seem to be able to hone in on the mystique of your characters and make them so real. That's what makes a great read, IMO.
Cheryl