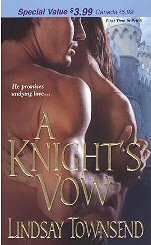 Ever since she was fourteen, Alyson of Olverton dreamed of marrying a brave, charismatic young knight. His name was Guillelm de la Rochelle - and his marriage proposal satisfied her deepest yearnings. But her father forbade their union, prompting Guillelm to set out for the Holy Land, breaking Alyson's innocent heart. Seven years later, the valiant knight has defied rumours of his death and returned home, having no idea that nothing is the same as when he left...Back from fighting in the crusades, Guillelm is stunned to find Alyson entrenched in his father's ancestral castle - even worse she was betrothed to his father before he died. Despite this chilling fact, Guillelm finds himself struggling to resist the temptation to seduce her. Torn between intense jealousy and overwhelming desire, he shocks them both by proposing marriage a second time, justifying that it will be easier to keep her safe if she is his bride. Little do they know, however, that there is an enemy in their very midst - one who won't rest until he destroys their chance at everlasting love...

Now Reissued and only 99cents/99p 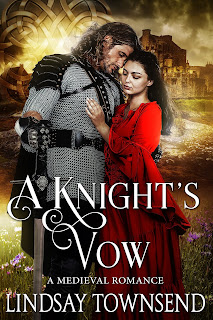 #99CENTS  A KNIGHT’S VOW #99c http://amzn.to/2uscGnw  #99p http://amzn.to/2fuytrV
Alyson heard the shouts from the surviving men-at-arms and jerked her head up, all thought of prayer forgotten. ‘My Lord Dragon,’ she whispered. Excerpt http://bit.ly/2vQXkMI

This story shows that even after years apart, when the boy becomes and man and the girl a woman, the affectionate nicknames still have meaning, the touches are still tender and the feelings genuine. While reading medieval books is never an easy task due to the detailed history that one expects to be part of, these books and especially this one in particular are worth the time and attention you give them. Enjoy!

This is romantic and compelling reading for all fans of historical stories. I enjoyed it and recommend this author for her strong voice and narrative skills.

A KNIGHT’S VOW drew me in with the pageantry of this medieval time and I was compelled to read this book. My heart melts any time a knight fights to win his lady love. Watching Guillelm do just that kept me sighing at the wholly romantic nature of his actions. Stoic at times, sinfully sexy and seductive at others, Guillelm is the ideal knight in shining armor. I think Alyson agrees with me one hundred percent!
A KNIGHT’S VOW is a gripping historical tale of love, life, and chances. It is a heady and passionate read which rapidly took me to a place that is timeless. I couldn’t have asked for a better story!

Townsend uses the taboos, superstitions and loyalties of the era to set up a turbulent but enjoyable romance.

A Knight’s Vow is a terrific Medieval romance penned by a supremely talented writer who recreates the past vividly and makes her readers fall head over heels in love with her valiant hero, intelligent heroine and their wonderful romantic story which will keep them reading late into the night and anticipating the next release by this wonderful storyteller!