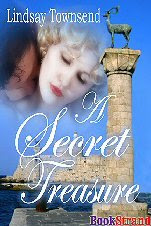 (If you like romantic suspense in Greek island settings, you may also like Night of the Storm, also set near Rhodes, and the Corfu-based The English Daughter, both reissued as ebooks at Amazon and Smashwords and only 99p/99cents each.)

I liked Eve immediately. She is full of common sense, good values, and is a hard worker. The rest of her family I was not so thrilled about. A more condescending bunch would be hard to find. They treat her like an idiot child and expect her to work ceaselessly to take care of them, when I suspect that they could well afford someone to help her. Julio is a great character; he is trying to get by in a very trying time. He and Eve have a very sweet love story with a lot of suspense, and a particularly vile villain. Ms. Townsend paints a beautiful picture of Rhodes and its towns and people, as well as giving the reader a plot fraught with tension and danger.

This is no armchair tourist account of Rhodes. It is clear Lindsay Townsend knows the island. She weaves her knowledge of history and setting into A Secret Treasure. Both Julio and Eve are unique, well crafted characters. Their courtship is natural and charming. The bad guy is deliciously bad. It is fortunate that A Secret Treasure is only 102 pages long as you’ll want to read it all in one sitting.

This is an exciting mystery romance that takes place during troubled times, before the Italians joined the Germans in World War 11. As usual, Townsend carries the reader with her to the finish of this story, which ends with a clever twist. Well worth reading.

The Long and the Short of It:

Suspenseful from its opening lines, Townsend’s A Secret Treasure takes us on a journey through historic Italy and into a story that charms with its joys, terrifies with its suspense, and more than intrigues with very unusual and interesting setting.

A Secret Treasure catches the readers eyes with its expertly written plot abounding with secrets and suspense. I loved watching Julio and Eve fall in love and the fact that they loved each other so desperately was just icing on the cake. Lindsay Townsend continues to release novels that are emotionally gripping. While A Secret Treasure is not as explicit sexually as some of her other novels, I hardly noticed. I was too involved with the story and Julio’s dreaminess!