In my "Dark Maiden" we learn what revenants are, plus the dangers of being a black, female exorcist in a time of suspicion and plague. 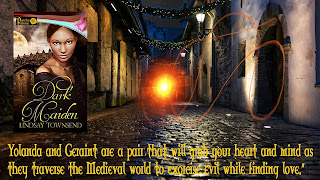 “Revenants are spirits who will not rest,” Geraint said before the reeve’s wife had another objection. “They are departed souls who will not leave, because they wish to have revenge, or justice.”

“Or they cling to a place they loved in life, or to their beloved,” added Yolande quietly.

In an echo of the large-breasted goodwife, the reeve’s wife folded her arms across her middle. “Is this not a matter for our priest?”

“But Godith, Father William is so old, and consider what he says concerning the rest,” Michael pleaded.

“That all trouble is the girls’ own sins.” Godith crossed herself, while Yolande sighed and stared into the fire.

“One of those priests,” she remarked softly in Welsh.

“Now we know why he did not summon you, or come out of his house or church to welcome you,” Geraint answered in the same tongue. “A black female exorcist will be a great evil to him.”

“And Father William has often taken to his bed this past ten days.” Michael shrugged his drooping shoulders in a gesture of hopelessness.

“No priest here, and at the darkest time of the year, when spirits and the dead gather,” Yolande said in Welsh. Geraint wished he could tip the priest out of this village and drag in another. The Archbishop of York should be able to help her and would do very well.

“What are you saying? Are you talking about me?” demanded Godith’s youngest daughter.

“No, my lovely.” Geraint snapped his fingers. The girl drew a new blue ribbon from her hair and exclaimed with delight.

Yolande cast him a look. “Still up to your old tricks?”

“You will not wear the ribbons I bought for you, so why should I not give them to these girls?” The three lasses, chattering like magpies, tugged more new ribbons from their hair.

“How do you do it?” Yolande inquired as the tension in the hut vanished like a burst soap bubble.

“You have the secrets of your trade and I have mine.” He wanted to give her more, of course—bright ribbons, bright tunics to suit her sultry looks—but so far she had smiled at him very prettily for his ribbons but not worn them. And as for tunics…she had told him, quietly, that an envious spirit or demon would be tempted to tear such clothes off her and he could not argue with that. She was the exorcist.

Their eyes met, she still in drab sage-and-mud-colored  clothes, he in his tattered motley. What would it be like to kiss her again, really kiss her? He need only lean forward to find out…

His fragile dream was shattered by the reeve, who pushed himself up from the family’s low sleeping platform and said to Yolande, “I have something to show you in the lean-to.”

Geraint gave the rest of his bowl of porry to the twins and leapt to his feet. “I will come too.”

If Michael Steward was about to confess anything, he wanted to hear it. And he was not about to let Yolande out of his protection, whatever her skills.

She may be the exorcist but by the pricking at the base of my neck I would say there is danger here, a practical, knife blade kind of risk. My kind of danger.

She knew she and Geraint had been betrayed, even before Michael Steward broke into a ragtag run outside the lean-to, galloping and gasping into the night. She knew even before the torches bloomed into fire and a stink of anxious, stale bodies crowded into her nostrils. She knew by instinct as Geraint knew. She could feel the tension in his body as he stepped straight behind her, shielding her as so often in these past few months.

Yolande had her bow, her sacred bow of Saint Sebastian, but no room to draw it. And she could do better by far than make these fearful people her unrelenting enemies.

The instant before the torches were lit in the dying garden plot of the reeve’s house, she had made her plan and acted on it.

She raised her fist and called out, “I have a mandrake here and the seven herbs of Christ. If you do me or mine harm, the herbs will change into spears. The mandrake will turn into a man and you will die.”

She paused, allowing her pity for the villagers’ fear to drain away. “You will die badly, believe me.”

“Believe her,” hissed Geraint out of the gloom, keeping out of range of the flickering torchlight. “I have seen the mandrake-man and it is terrible.”

“That proves you are a witch!” shouted a woman, and one of the torches swayed as she lost her footing on the damp ground.

“No witch may touch the seven herbs of Christ and live,” said Yolande calmly. Glimpsing a flash of white as another villager moved an arm, she stooped, plucked a pebble from the earth and threw it all in a single movement. The woman howled and dropped her dagger, where it lay gleaming.

“You are black as Satan!” called another woman, and others in the circle echoed her cry.

“Or  Saint Maurice or the Magi,” Yolande replied.

Godith came to the door. “How do we know you came in answer to the reeve’s call?”

“I came, Godith, because that is my Christian duty. You need my help here.”

“But you are black,” mumbled Godith. Encouraged by shouts of agreement, she joined the crowd.

Mother of God, I grow weary of this complaint. For so many, I am either a luck-charm or an evil. And Geraint is blacker-hued than me, at least in the summer. “I have touched relics of the saints that are darker.” She grinned, knowing her teeth and eyes would show very white and bright against the torches. “Come, shall we say the creed together?”

“But Godith  is right. How do we know you are not sent by them?” protested a third voice, high as a shrilling bat.

“By Christ, they are all women here,” muttered Geraint, and Yolande caught the strain in his voice. He would fight any man but females he revered.

“Fear not, honeyman,” she whispered. “Not one is possessed, and I can deal with the rest.”

To Godith and her cohorts she made the sign of the cross and recited the first line of the Lord’s Prayer in Latin. In English she said, “No demon can do that, believe me.”

“And believe me, my heart, when I say you should convert these women quickly,” said Geraint beside her. “Before we are burned to a cinder or torn limb from limb would be best.” He switched to Welsh. “You have never used mandrake in your life.”

“You are not the only one who can make a feint,” she replied in the same tongue.

She chuckled, keeping her laugh fat and easy while she scanned the big eyes and fluttering fingers that hovered round the crackling torches. 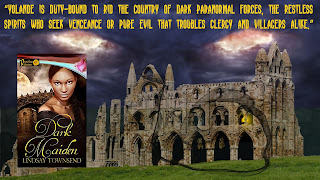