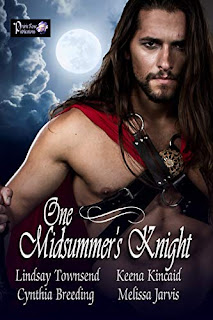 Who dares to seek love on a Midsummer’s Eve when the Otherworldly veil is thin, and anything can happen? Magic runs high, and passions flare on this special night made for taking chances. For this is the night when ritual fires burn bright and invite lovers to consummate the promise of their love—and anything can happen!

UNICORN SUMMER—LINDSAY TOWNSEND: When the faery queen casts a spell on a knight to change him into a unicorn, there seems to be no hope for him—except the stronger magic of true love!

MIDSUMMER’S PROMISE—KEENA KINCAID: Can a mercenary find his heart’s home with a beautiful healer? Her brother, a seer, says they are not for each other—but can their love change fate?

A FAIR BARGAIN—MELISSA JARVIS: When a maiden trades her own future happiness for that of her sister, it seems all is lost to her—until an Otherworld prince comes to her rescue and seals a different kind of bargain—made of unexpected and forbidden love.

A MISTY KNIGHT--CYNTHIA BREEDING: Can a daring knight’s love bring happiness to a beautiful woman who others call a witch? He must find a way to rescue the stubborn lass before she is killed, but can he do it as a human?

Here's an excerpt from my story "Unicorn Summer"

He was bored of eating grass. Unicorn, who had once possessed another name, another form, shook his golden mane and flicked his long black tail in displeasure.
Fairies dress in flowers and sing with the nightingales, cows dispute on where to find the best green forage, horses love to play chase the shadows over the rolling hills and snort tales of adventure to each other. Even chickens banter with dust sprites. Why do I lack such lively speech? Why am I not content?
Unicorn scraped his pale horn on the bare earth and galloped to the edge of the pool. He might have asked “Why am I alone?” Sometimes, in dreams, he heard a woman telling him it was all a punishment, for his pride and cruelty, though when Unicorn woke, he could never remember what his sin had been.
He whickered softly and stared at his reflection in the water. What does it matter that my eyelashes are as long and sparkling as frosted spiders’ webs? What does it matter if my eyes are sometimes blue, often grey, and can spot each tremble of the ash leaves before they fall? Why, with all my flowing beauty, am I solitary?
Who am I? Who was I?
The rippling spring held no answers but there was something submerged in the deep pool, beyond Unicorn’s hazy reflection. A floating streamer of mane—no, this was hair, human hair—drifted up towards the surface.
What does brown hair floating underwater mean?
Unicorn snorted and stamped the ground. Part of his aching mind knew this mystery should not be beyond him. It was no puzzle at all, even if the long hair was as shiny and lush as the ripe acorns he liked to chew and it clung to the pond’s edge like bladderwrack.
No! Unicorn twisted his neck and bit down on his own flank. The pain shrank down the world and his senses and all at once he understood—There was a body in the pool.
Even as he plunged his head underwater and struggled to grip the hair with his teeth, a pair of flailing hands shot up out of the green-blue murk and grabbed his spiral horn. Unicorn planted his hooves in the churned earth and shuffled backwards. The weight made his head hurt and his shoulders burn but he did not shake the shivering fingers off. One slow step after another he pulled himself and his burden free of the pool.
A final sharp crack as the body broke through and Unicorn could shift much faster, nimbly dragging the figure into a springy soft bank of herbs. The body coughed, rolled onto its stomach and shook like a wet dog, only this was no hound.
A woman, Unicorn realised, and I have rescued her. He tossed his head in a preen, but resisted the impulse to charge off over the hills in a victory gallop.
The woman might need him again.
He settled beside her, careful to keep his sharp horn away from her trembling limbs, and covered her with his black tail. Sleep, he willed her, content as he had not been for an age when she shuffled into his warm side and his sharp ears caught a dainty snore.
When she wakes, I will know her name. But she might ask for his and how could he answer? He glanced at his polished hooves and thought of a way.