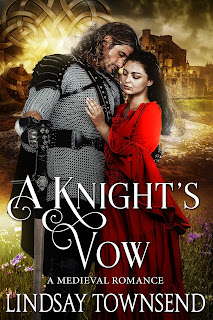 (I love this cover by artist Melody Simmons.)

A crusader, haunted by grief and guilt. A bride-to-be, struggling with old yearnings and desires. Can Sir Guillelm de la Rochelle and Lady Alyson of Olverton rediscover the innocent love they once had for each other? When Guillelm makes a fearful vow on their wedding night, is all lost forever between him and Alyson? And will the secret enemy who hates their marriage destroy them both?

“A Knight’s Vow” is a tale of romance and chivalry. In a time of knights and ladies, of tournaments and battles, of crusades, castles and magic.

The instant he spoke, Guillelm thought, What am I doing? Only a few hours earlier he had been standing before his father’s tomb in the tiny local church of Olverton where Lord Robert had been buried, his head full of memories and grief. Only yesterday, when he disembarked from his ship at Bristol, had he learned that his father was dead. With that dreadful news and Hardspen castle under threat he had no time for idle, pleasant gallantries, even with a serving maid as pretty as this one.
And yet this dainty, dark-haired serving maid had given him such a smile of welcome, and of sympathy, that he had been comforted. She had not mocked him or flinched, she had given him instead a look of recognition, as if she knew him. She was familiar to him, he felt; as familiar in some ways as the breath in his body, but his mind was moving slowly tonight, trying to take in the loss of his father and his own sudden coming into his inheritance. He had responsibilities to face; the fate of many lives had been placed by God into his hands, and he must be equal to it, not distracted by this girl who reminded him —of what? Something he had put aside long ago, with pain and regret, as being out of his reach.
But what was the use of these thoughts? he reflected, trying to fight off a well-worn, familiar despair. Women feared him— his elder sister Juliana had been proved right about that. What had Heloise of Jerusalem said to him when she had dismissed his suit? ‘You are too big and brutal, my lord Guillelm,’ she had drawled, her hazel eyes widening as she revelled in his frozen expression of shame and distaste. ‘They call you dragon on the field of battle —you would burn a woman to ashes in your marriage bed.’ He had stumbled out of Heloise’s hot airless chamber, the sight of her opulent, silk-draped body, artfully arranged blonde curls and beautiful mocking face burning like a brand into his memory, her scornful voice singing his ears.
‘My Lord! Only kiss the creature and let us all return to our ale!’
Thierry again, damn the man to hellfire! Guillelm thought, scowling at the interruption and his men’s laughter, swiftly stifled as they registered his anger.
‘My Lord!’ the small, skinny seneschal was starting to say something but he was cut off by the maid herself, who observed in a low, swift voice, ‘Do not be concerned. All is well, Sericus.’
To Guillelm there seemed to be a challenge in her words. He took a step closer, amused when she stood her ground. Again, a strange sense of recognition shot through him, an instinct that he knew her very well.
Or was it merely that he found her pleasing? the cynic in Guillelm asked himself. Even when she had been standing in the shadowy stairwell, sequestered like a nun by that drab gown and veil, her beauty had shone through, brighter than any torch. She was more than a head shorter than him, small and fine-boned, so that he felt clumsy beside her, and yet she moved and carried herself as boldly as a warrior, as though she had no fear of him.
As she stood before him now, he could smell the perfume of her hair, the scent of rosemary filling his nostrils as he quelled a sudden, powerful desire to tug off her veil. From the few stray tendrils escaping the edges of that plain cloth to frame her flawless, heart-shaped face, Guillelm knew that her hair was black: very black and fine and straight. He guessed it would be long, reaching as far as her slender waist: fine shimmering tresses that a man could lay his head on for comfort, love.
‘My Lord?’ she inquired softly as he took her hand in his. It was a work-roughened hand, resting in his as lightly as thistledown. This close, he could see the dark shadows under her eyes, the taut, bleached look of her cheeks and was pierced by pity for her weariness. This little maid had clearly done much in this castle but where was her mistress, the new lady of Hardspen? he thought, caught in that instant between anger at the unseen chatelaine and protectiveness for her maid. He had heard rumours tonight that had set his teeth on edge: that his father had married again, that there was a widow in this keep, but he had seen no sign of such a woman.
‘Mother of God, why are you alone with this?’ he murmured, running a thumb gently down the side of her cheek. He felt her palm, still trapped in his right hand, tremble against his. The heat of her fingers and the warm silk of her skin stirred him afresh, making him forget all else.
Telling himself he was only doing this because his men would otherwise consider him soft, he lowered his head and kissed her full on the lips.

‘Alyson, how is it that you are here? And why is there an army pitched outside this castle?’

Posted by Lindsay Townsend at 11:46