Medieval people believed in dragons. In the east, dragons were seen as powerful, imperial, and signs of good fortune and plenty, but in the west they were often linked to Satan, the devil, "The Old Serpent", and regarded as trouble.

Sometimes such creatures are called dragons, at other times they are worms or wyrms, armed with poison like a snake. The hero Beowulf fights a dragon who lives in a mound and guards a treasure hoard. The Vikings believed in dragons that were more like serpents, so in the Poetic Edda we learn how Sigurðr killed the dragon Fafnir, who behaves very much like a snake.

Sigurðr and Reginn went up onto Gnita-heath and there found Fafnir’s track, where he slithered  to the water. Sigurðr dug a pit there in the path and went into it. And when Fafnir slithered away from the gold, he breathed forth venom, and it fell down onto Sigurðr’s head. And when Fafnir slithered over the pit, Sigurðr stabbed him in the heart with his sword. Fafnir shook himself and lashed about with his head and tail. 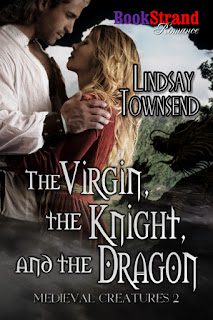 In Viking art dragons appear lithe and sinuous, coiling about. However ominous, they were popular in stories, suitable opponents for warriors in tales.

The appearance of dragons in the Middle Ages usually foretold disaster. The Anglo-Saxon Chronicle for the year 793 tells of the first Viking raid on Lindisfarne, Northumberland, and the omens that preceded it: ‘Here were dreadful forewarnings come over the land of Northumbria, and woefully terrified the people: these were amazing sheets of lightning and whirlwinds, and fiery dragons were seen flying in the sky.’ 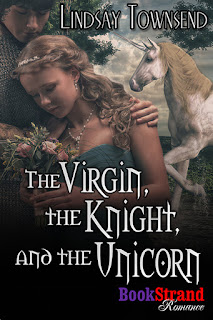 In keeping with the heroic warrior theme but now in a Christian context, several saints battle with dragons in medieval tales. There is the famous Saint George and the Dragon (a dragon lays waste to the countryside and is offered sheep, youths and maidens as sacrifices. When the situation becomes so desperate that the king's daughter is offered, the knight George appears and vanquishes the beast.) In the ultimate show-down of good verses evil, the archangel Michael battles the great dragon Lucifer in the Book of Revelations. a text often illustrated by medieval artists.

For my own story of 'The Virgin, the Knight and the Dragon,' I took these ideas of might, power, battle, knight heroes, sacrificial maidens and gold and gave them a twist. I hope my readers enjoy the results.

The Virgin, the Knight and the Dragon on Amazon

The Virgin, the Knight and the Dragon on Amazon UK

The two book series on Bookstrand

Posted by Lindsay Townsend at 11:08