Vampires in the Middle Ages - why then? 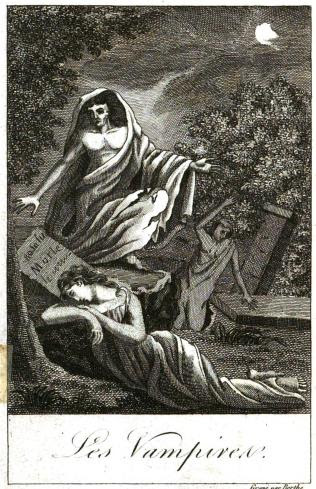 Medieval people believed in ghosts and in evil necromancers, using devilish arts to re-animate the dead or to control demons. They believed in witchcraft and charms and magic. They believed in succubii and incubii. Vampires, however, do not really make an appearance until the fourteenth century. Why then?

In my medieval historical romance, The Snow Bride, I don’t mention medieval vampires but I do deal with witchcraft and necromancers. My heroine, red-haired Elfrida, is a witch and wise-woman and through the ‘magic’ of love she helps my scarred hero Magnus. Both Elfrida and Magnus must battle against an evil necromancer – a medieval wizard who summoned spirits and demons – and, in a desperate race against time, recover Elfrida’s younger sister. In 'The Snow Bride' I show medieval magic and beliefs, but not medieval vampires.

I do touch on vampires in my latest medieval historical romance, Dark Maiden. My heroine, Yolande, spends a lot of time persuading others that the spirits or supernatural creatures they are dealing with are not vampires, mainly because she knows they are not and because the ways of dealing with vampires is very violent and would be distressing to bereaved families. I do have her fighting vampires however, if only in her dreams, and then she shows what a medieval exorcist would have to do.

Posted by Lindsay Townsend at 13:10

Good article, Lindsay. Considering what gives us the willies, I'm very sure that being surrounded by the recently dead must have been enough to send folks crackers. [shudders, and noteven for effect!]