The Romance of snow

The romance of snow is a relatively recent idea. When the river Thames froze in the 'little ice age,' between the 15th and 19th centuries, people enjoyed great frost fairs on the river. Christmas was celebrated as the birth of Christ. Winter however was largely dreaded and endured, a time of little light, dwindling food, bad roads.

Nursery rhymes show us winter before the modern age:

Little Polly Flinders
Sat among the cinders,
Warming her pretty little toes.
Her mother came and caught her,
And whipped her little daughter
For spoiling her nice new clothes.

(Little Polly might also have suffered from chilblains by sitting with her feet so close to the fire.) 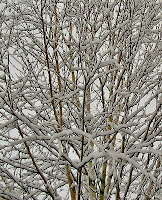 Doctor Foster went to Gloucester
In a shower of rain,
He stepped in a puddle,
Right up to his middle,
And never went there again.

Roads could be very dangerous, especially in winter.

The north wind doth blow and we shall have snow,
And what will poor robin do then, poor thing?
He'll sit in a barn and keep himself warm
and hide his head under his wing, poor thing.

Before central heating, keeping warm was difficult for everyone in winter. Following on from a custom begun in Victorian times, I always feed the birds in winter.

Food in winter could be sparse, less than fresh and dull.

As living conditions improved, people began to enjoy winter. There is a pleasure in watching snow fall and in making snowmen, having snowball fights, going for snowy walks. I love the trees in winter, so sculptured and stark.

I also enjoy setting romance stories in winter. The dark and cold of the season can give my hero and heroine something elemental to strive against. Their warning feelings for each other contrast with the bitter weather. And perhaps they can have a snowball fight...

Please see my 'The Snow Bride,' 'Twelve Kisses,' 'A Knight's Captive,' and 'Flavia's Secret,' for more.
Posted by Lindsay Townsend at 13:22

I had no idea you were a fellow snow aficionado, Lindsay. Nice post. I love snow, especially the silent blanketing overnight. :)

I love snow, too, Rose and agree re the silent blanketing.
Enjoy snow but respect it.
Everyone needs to keep warm and safe.

Snow is great when you don't have to shovel it or drive in it. I think there should be selective snowing--the snow falls on the grass and the woods, but doesn't fall on the roads or the driveways. I think it's going to take a while to convince the snow to do that. *g*

I agree, Jenny!
I agree with the idea of civilized snow, Linda!

Snow does give a story a romantic feel. Matter of fact, expecting a little snow tonight. You're right, Lindsay, great setting for a romance.

Snow does make beautiful scenery in a story. I like how you described the mistletoe and snow in Snow Bride.

There's always something romantic about it, isn't it. I lived up in the French alps many years ago and enough fell ovenight to bury cars. People put masts and flags on their cars so they could find them and dig them out! Still lovely though.

Hi Jerri - snow is so pretty! Did you get your snow last night?

Thanks so much, Celtic Chick! (I'm writing a sequel to Snow Bride at the moment. It's set in summer and I'm finding it hard with all this lovely snow, to think of heat and dust!

Hi Kristalbaird! What a clever idea to put flags on their cars. That is a lot of snow, though!

I too love snow and stories set in winter! Very picturesque and romantic.

Thanks, Rosemary! I imagine it's very snowy where you are at the moment.

Great post, I did a snow scene that came out of nowhere in The Jaguar Sun, but it worked and it turned out I loved it! There is something so mystical and quiet during a snowfall.

I agree, Sara. Snow does have a magical quality. Glad your snow scene came out so well.

I like selective snow too. Light snow covering on Christmas Eve, so Santa and his sleigh have something to glide on, then that's enough for me. I escaped the up north storms because we winter in Florida. But I do miss the coziness and beauty of ice and snow when I could view it from inside not from the driver's seat in my car. Lindsay, this was a cute post with rhymes and explanations. Very clever.

Thanks, J Q Rose! Glad you enjoyed it.

Florida must be beautiful all year round.. Is it very warm in summer?

Lindsay, I think it is warm and humid in the summer. But we don't live in FL in the summer, only in the winter. We're known as snowbirds. We travel south once it gets cold and nasty up north, then return to the north in the spring like migrating birds.