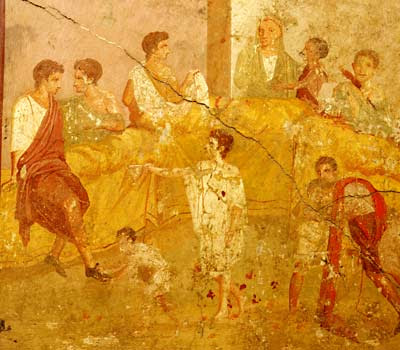 It may not have been Christmas exactly, but the ancient Roman Saturnalia (17th-23rd. December) was certainly an opportunity for feasting and gift-giving. Over the years, this time of merry-making, sacrifices and gift-giving expanded to a week and the poet Catullus - who knew a thing or two about parties - called it 'the best of days'.

In many ways this ancient festival was rather like Christmas:

Schools were on holiday.

Shopping at special markets was encouraged.

Holiday clothes were worn - the informal, colourful 'dining clothes' instead of the plain, bulky toga.

Feasting was indulged, with Saturn himself in charge as Lord of Misrule.

My ancient Roman historical romance Flavia's Secret has its climax and ending during the Saturnalia - have you entered my competition yet, by the way? If not, see the previous post for details.

The Pompeiian partygoers in the picture come from the BBC's Ancient Rome pages.
Posted by Lindsay Townsend at 18:48

Great article, Lindsay! I'm blogging about Regency Christmas traditions and started out yesterday with the origins of Christmas, including Saturnalia and Sol Invictus. Check it out at
www.joannawaugh.blogspot.com

Thanks, Joanna! I'm coming to check it out now. Best wishes, Lindsay