The nights are drawing in... 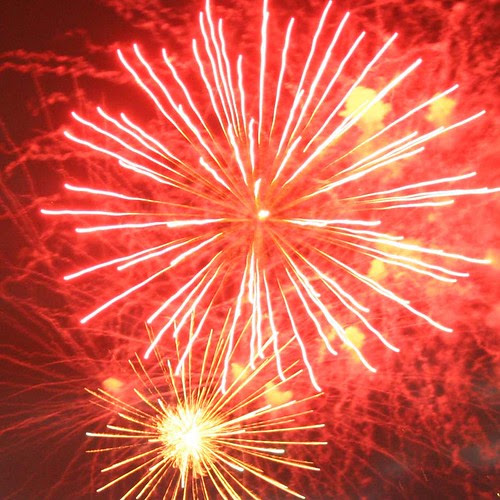 It's almost Hallowe'en - pumpkins with faces on, witches' pointy hats, and all that - isn't it? Well, here in the UK the trick-or-treaters have certainly been around for a while, but not as long as Bonfire Night (Guy Fawkes Night) on November 5th.

In theory Bonfire Night celebrates the foiling of the Gunpowder Plot in 1606, an attempt to blow up Parliament. The lightning of fires at this season of the year, when autumn changes to winter, is much older than that, though, and goes back to Celtic fire-festivals such as Samhain and the midwinter festival in Shetland, Up Helly Aa.

We have our own private, family bonfires on November 5th, or go to a larger, communal blaze. There are always fireworks, as there are for the Indian community who celebrate the Hindu festival of Diwali, which happens at roughly the same time of year (October 28th this year). Nervous pets need to be kept indoors for about a week before Nov 5th and a week after.

Once the fire is lit, the little children love dancing about with sparklers. The older ones lounge about trying to look cool lighting rockets and pin-wheels and waiting for the arrival of the food: baked potatoes with butter, pie and 'mushy' (marrowfat) peas, parkin and bonfire toffee to follow. Here's a recipe for parkin. It's easy to make and a traditional Yorkshire favourite where I live.

(Photo by Ali Graney sourced from Flickr.)
Posted by Lindsay Townsend at 18:38

Ah, yes, Halloween, how can we ever forget it? In the US, they extended Daylight Savings Time a week so that the little trick or treaters wouldn't be out in the dark. But on the other side of the day, early morning is now as dark as the middle of the night. But only one more week, and we turn the clocks back.

Hi Linda! Just keep counting down the days. (Our clocks went back an hour this weekend.) Years ago, the government tried keeping British Summer Time the same as in winter, but found that youngsters in Scotland were having to go to school in the dark so had to change it. Difficult!

the article written is very good, it's very informative and
is written in a commendable way which never makes the reader feel boredom
keep it up man keep posting articles like these. you reallly have done a commendable job
.even i have also written some articles on online Patake
may be you would love to read that. nice work man...keep it up!!