In the days before covid, when I would go to speak at Women's Institute meetings, I would often be asked, "Where do you get your ideas from?"

This blog explores where and how I develop my story ideas.

Where do I get ideas from?Everywhere. But the main triggers are:

1. What if so-and-so happened?

3. I tend to think in pictures and scenes, as if watching a frozen film. Sometimes a scene comes into my mind and won’t go away, and then I play with it and start from there.

4. I like to be interested in everything and everyone. As I write, I try to keep in mind that everyone has a story, that everyone can be a hero or ant-hero, even if they themselves don’t know it.

How I develop ideas.

1. Start with a scene, a frozen incident.

3. Place the characters in a setting I can relate to.

4. Give them a plot that stretches my people.

5. Mix all these together in a chapter by chapter outline.

An example of this process is how I came to write my Christmas Romance, "Carrie's Christmas Viking." In this case, my inspiration came from an object, the figure of a Viking that had once belonged to my father-in-law. It was known in my husband's family as Eric, so I called him Eric, too. 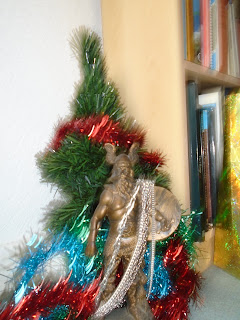 As you can see from the photograph, Eric is wound about by a "chain", a silver-gilt necklance that was my mother's and that I playfully draped over Eric as a means of keeping the strands from tangling. Eric stood in my window for a long time and I knew I wanted to write about him, but had not found the driver of any story. 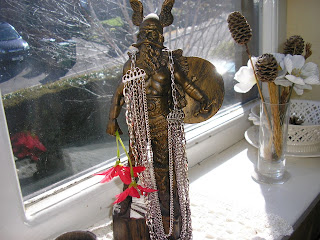 The chains of the necklace gave me an idea. A Viking bound, a Viking trapped, that was a powerful image, a heroic, romantic image. So my next thought was "Why is he bound? How is he trapped?"

The answer suggested to me was "Magic", and after magic, the craft of a witch. A witch whom Eric had angered for some reason. Since the witch in question was a good witch, my Elfrida from "The Snow Bride" "A Summer Bewitchment" and "One Winter Knight" I knew that Eric had tried to work against her and Magnus, her warrior companion.

Those thoughts gave me the seed that became "Carrie's Christmas Viking," a story of romance and redemption.

To read it for free, see it on KindleUnlimited. 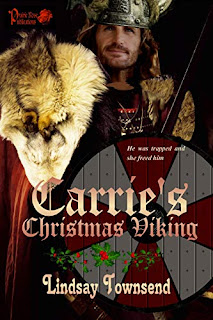 Posted by Lindsay Townsend at 10:23