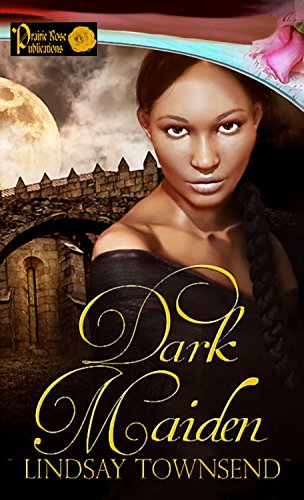 Beautiful Yolande comes from an exotic line of exorcists—a talent she considers a gift—and a curse. In fourteenth century England, a female exorcist who is also black is an oddity. She is sought after and trusted to quiet the restless dead and to send revenants to their final rest.

Geraint the Welshman captures Yolande’s heart with his ready smile and easy ways, and the passionate fire of his spirit. An entertainer, he juggles and tumbles his way through life—but there is a serious side to him that runs deep. He offers Yolande an added strength in her work and opens his heart to her with a love such as she’s never known.

But Yolande is not free to offer Geraint her love completely—not until her “time of seven” has passed.

Can the powerful attraction between them withstand the powers of evil who mean to separate them forever? Yolande’s conscience and conviction force her to face this evil head-on—but can Geraint save his Dark Maiden…


Here's two new excerpts, the first from Yolande, my exorcist, when she meets the dangerous Geraint, my anti-hero.


The following morning, passing the bread and cheese that the sisters had generously given her to a beggar outside the convent walls, Yolande sensed someone watching.  She turned, forced to take a rapid backward step as a stranger trod on her shadow. She had not heard his approach.
“Mistress Yolande?”
“You have the advantage, mister. You know my name.” She smiled to take any sting from her words. “May I know yours?”
Greetings and courtesy were important to her. Each gave clues as to character and wishes. She had once known a demon, beautifully polite, who would have ripped the flesh from her bones had she not bound him by his own rules of manners.
The stranger bowed, a good sign. He muttered something in a language she did not know, which was not good. She moved a little closer, ready to boot him in the balls if he did anything unsavory.
“Geraint Welshman, at your service.” He crouched then looked straight at her. “I am just taking something from my pack, if it please you.”
She grinned at him to prove she was unafraid, her body heavy and languid as she itched to go onto the balls of her feet, ready to scrap. A quick stab to those astonishing black-blue eyes, a swipe at his knee and Geraint the Welshman would be groveling in the hard-packed mud.
Which would be a shame for such a glorious face. He bent his head, showing his trust of her, to rummage in his pack. He was a good-looking brute, not too muscled but as lean and wiry as herself. There was a soft jangle of bells within his patched shoulder-pack, revealing him as a wandering entertainer, a less deadly mirror of herself. They were even about the same height.


I entertain the restless dead before I send them on. What must it be like to work for living laughter?
Hard, she guessed, noting his less-than-clean black hair, the scars on his knuckles, his drab motley, missing bits of ribbons and coins. He was darker that she was, tanned by many suns, and with excellent teeth.
Strong, rangy and in no hurry to stick to one place, but a honeyman all the same. She felt a flicker of interest, a few youthful, girlish hopes. She was ten-and-eight these days, young for an exorcist but ripe for marriage. Her father, a remarkable man, had managed both. She missed him, but her time would surely come—maybe with this Welshman.
“The pardoner said you would understand the message with this.” Geraint interrupted her reverie as he laid a crucifix down on the rutted road, on top of his pack to keep it from the dirt.
Yolande stared at it, all hopes forgotten in an instant. She sensed the earth shifting beneath her feet as the blood pounded within her temples, making her convinced the top of her skull might shatter. “Oh, great Maria, already?” she said, unaware she had spoken aloud, crossing herself, making the sign of the cross above the crouching Geraint. The great bow across her shoulders creaked as if in warning.
So soon! I must prepare with care. If this sign is right, there can be no mistakes. Pray that I am ready. It is so soon, so soon…


Here's the second excerpt, this time from my hero's point of view.


The abbot… moved to the crucifix, bearing it aloft and tucking it safely into the crook of one arm.
Will he sing it a lullaby too?
Geraint folded his arms across his chest like an angry fish seller’s wife. It was that, or punch an abbot. “And what do you love about Yolande? How her eyelashes curl at the ends? How she puts herself into danger first, to protect others? How she never abandons a friend? How she walks all day without a complaint? How she sometimes talks in her sleep because she is so beset? How she laughs and sheds ten years each time she does? Or are such human reasons too earthy for you?”
He stopped, mainly because he had run out of English words for the moment and his mind was filled with indignant, furious phrases in the Welsh. He also wanted to see whether Abbot Simon would answer.
“These human trifles, as you call them, are irrelevant. It is her soul—”
“Yes, her soul, hers alone, and unique. Created in the image of God. What do you love about that? Or is the soul of one female exorcist too mean to consider?”
“Stay away from her!” thundered the abbot. “What do you know of her trials and torments, of what she might need to encounter? If you love her, you should not trouble her. Or would you act upon this love and then abandon her —as is the habit of fleshy, sinful men?”
“Sorry, no.” Geraint counted off on his fingers. “I will not leave her, no. I will not act upon anything and abandon her, no. I will not trouble her, no. Do I know the trials she has? No, I do not, but then, neither do you, my lord abbot, neither do you.”

This is one of my favourite excerpts from my historical romance, “Dark Maiden”, and shows Geraint, my hero, and all his anti-authoritarian, bumptious attitudes. Geraint will stand up and fight anyone or anything, including an abbot. I also like it because it shows Geraint’s deepening feelings for Yolande, my black exorcist heroine, and it tells us more about her. This excerpt also shows the attitude of the medieval church to physical love outside marriage and hints at the serious trials that Yolande will have to face – but not without Geraint
Posted by Lindsay Townsend at 11:12

Good information. And the author is using the different way of writing format and quality information. New information and guidelines are improving the skills. I am writer at custom essay writing service and this information is changed my writing styles. I am very happy to see this type post and I will share this article on my personal blog and friends. I am sure they will get new information and ideas from this post.