A Perfect Christmas Read - One Christmas Knight - OUT TODAY! 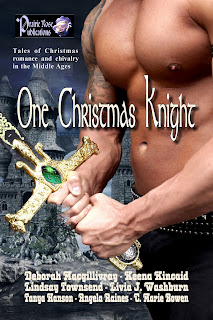 ONE CHRISTMAS KNIGHT, an anthology of medieval novellas, is now out at Amazon. There are seven wonderful historical romances here, by various authors, all set around Yule and Christmas.

Here's a blurb for each of  the stories, plus the blurb and an excerpt from mine.

NOW IN PRINT AND EBOOK!

Sir Rhys de Valyer, on his way to Scotland to join his liege, Julian Challon, becomes lost in a blinding snowstorm. But this is only the start of his troubles. In a brutal ambush, he and his men are attacked and left for dead. Rhys only escapes the horrible fate due to his trusted steed, who manages to drag him away from the battle. Fearing death’s approach, he never expects a beautiful snow angel to come to his rescue.
After being cast out by her family for being the bastard child of a Selkie, Annys Bràigheach has made her life in the sanctuary of Rowenwood Forest, far away from the world. In spite of her acceptance of the solitary life, her heart still yearns for more. To her surprise, after making a Yuletide wish, she discovers a handsome knight, clinging desperately to his horse, half-frozen with two arrows piercing his body. Her healing skills may save him, but can she reach his heart?
Magic can happen at Yuletide if only you can believe….

When Meryk the Outlaw finds a badly beaten woman beside the road, he almost rides on. With a price on his head and a winter storm raging, even a short delay could cost him everything. But when he discovers she’s ready to give birth, he takes the risk and vows to protect her.
Ada of Bew doesn’t want the outlaw’s help—much less his protection—but she has no choice. Unable to run any farther and ready to give birth, she must place her faith in this stranger…or die at the hands of the men who want to kill her unborn son.
In the struggle against the cold and would-be kings, Meryk and Ada discover love is the most unexpected gift of all, but will they survive long enough to claim it?

Sir Hugh Tarrant returns home from war with a limp from an enemy's sword and a hole in his heart from the death of his beloved. Lady Margaret Dillon is filled with anger at the man she believes deserted her sister. On a stormy Christmas Eve night filled with danger, fate throws them together and makes unexpected allies of them. Will passion ignite as a result...or will they survive to find out?

Annalisa has lost everything to her uncle. Taking sanctuary in a convent for safety, she yearns to go back and reclaim her rightful place. When she discovers a seriously wounded man, she realizes that he might be the one who can help her.
Jack wakes up in a convent, wounded and fearing for his own sanity. The last thing he remembers is a firefight in the Middle East, and the pain of being shot. Waking up centuries in the past is not what he expects—but Jack has his own code of honor, and when Annalisa asks for his help, there’s no way he can turn her down.
With the help of Mother Albrade, a nun who has powerful visions and knowledge of the future, Jack and Annalisa begin a journey of discovery and bravery that just might change both their lives—or end them.

Cursed by a bitter enchantress in ancient times to wander the earth as an immortal, Jurian Locke is bound by both love and magic to answer his beloved's need in times of danger.
Into each new life, his soulmate is born, unaware she is tied to him by magic, unknowing that a threat to her life will send forth a summons to a man she doesn't know.
Drawn together in dangerous times—his eternal love is her single chance at life. His curse, the only time he can be with the woman who possesses his heart.
Her call reaches him, this time, in 1328 at a Yuletide tournament for King Edward III.

To save her family’s fortunes, Lady Alisoun must wed an elderly earl the day after Christmas. But in the chapel on Christmas Eve, her heart collides with that of an elegant, mysterious stranger. Is he…one of King John’s spies?
Raised in a monastery, Lord Kitt has no experience with love, but finds his heart lost to a lovely lady. Yet he cannot succumb, for the day after Christmas, he must marry a woman he has never met.


For sale here at Amazon here

And at my author Amazon page here

From Barnes and Noble here

Excerpt from Sir Baldwin and the Christmas Ghosts.

Sir Baldwin and the Christmas Ghosts

“I can help you with your ghosts, sir.”
For an instant, no longer than a single beat of his heart, Sir Baldwin of Brigthorpe was too startled to answer. That a stranger had entered the manor and he had not heard any approach was disconcerting, that the said stranger could sense the spirits that accosted him every night was disturbing. Not that he let such unworthy, serf-like feelings show on his face. He was a knight—courage and power were his.
“Sir? Do you wish for my help?”
He would have ignored his own peasants if any had dared to keep questioning him, especially one certain grizzling boy, but courtesy to strangers had been ground into him. Reluctantly, he fashioned some reply. “I do not think anyone can aid me. There are too many ghosts.”
I should not have admitted that. Mother of Almighty God, I must be wearier than I thought.
Scowling, Sir Baldwin swept the last of the rotted floor strewing into the fire-pit in the great hall and watched the stinking mess smoke and slowly burn. His back and shoulders ached worse than after a sword practise but he forced himself to straighten and relax. He had not been physically attacked yet and doubted he would be. There are few left alive to try. The ghosts were another matter. There are so many...


Reminded of his losses afresh, the grief sharp as broken glass within him, Baldwin looked at the dais. A swift glance reassured him that the brat was still asleep on the platform, snuggled down in his own long winter cloak. Last year I would never have given a cotter bastard any of my clothes, even though we are akin. Frowning anew, he flicked the broom from hand to hand and raised his head. “How did you come here?”
Posted by Lindsay Townsend at 16:44