OUT NOW - Valens the Fletcher and His Captive - Cover and First Chapter. With Money Off! 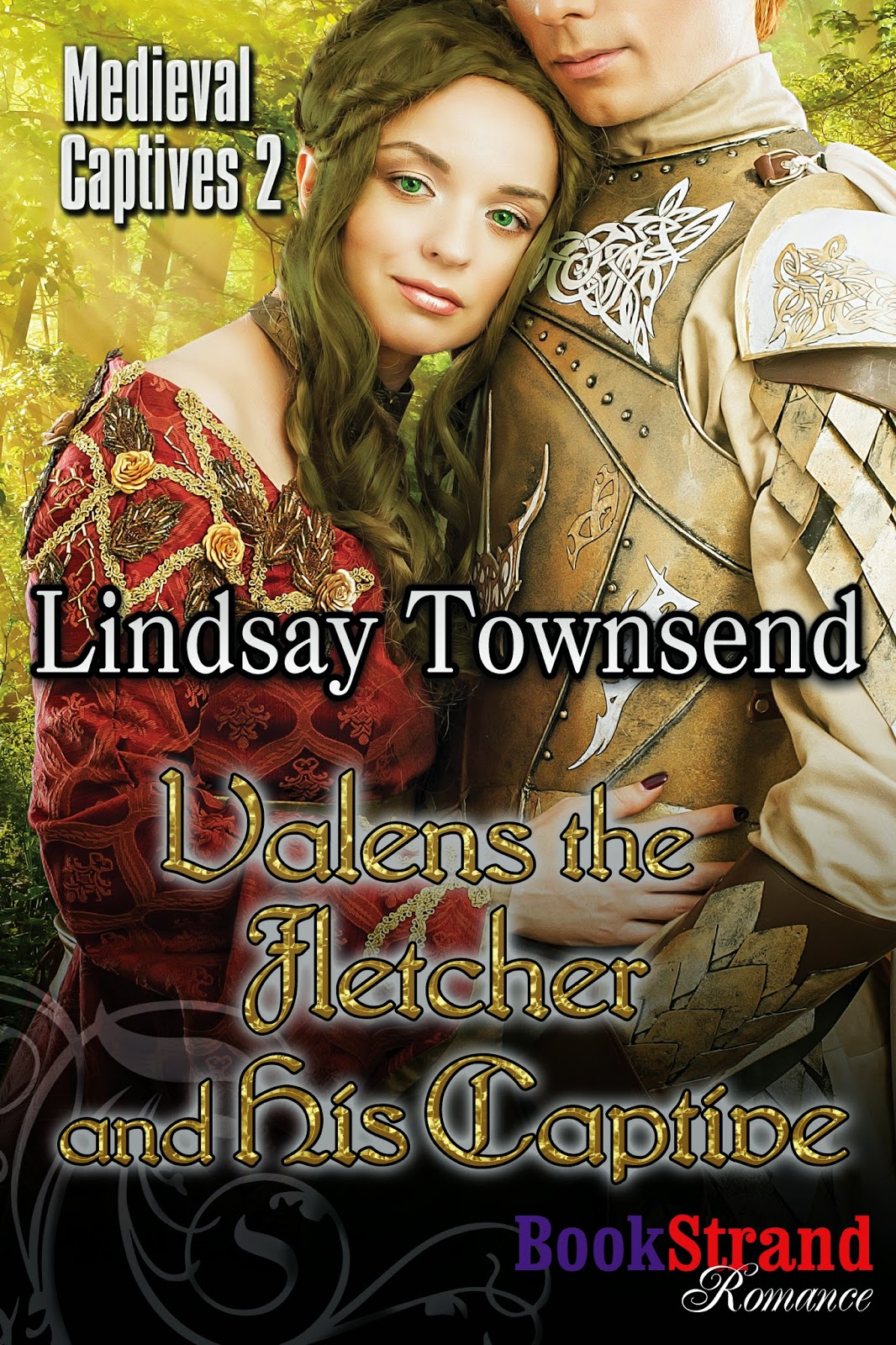 
Now with money off!

Katherine could not shake the feeling that she was being watched. Worse, that she and Jack were being watched. The other women of this camp constantly slighted her in flea-bite ways, remarking or gesturing about her small size, feeble strength, and lack of wood-craft. Big Agnes, their leader, had agreed to let Katherine travel with the gang and had then ignored her. The others—who surely were no goose herders, for where were their geese?—had copied Agnes, or Aggie, as she liked to be called. For the week Katherine had traveled with them, aside from being piled with filthy clothes to wash, she and Jack had been left alone.
It is exactly what I want, she told herself, but lately, with this constant tingle at the back of her neck and the sinking feeling in her stomach, with this sense of being watched, spied on, she was less sure.
Jack smiled at her, gummy and warm, and she was enchanted afresh. That she and Eric had produced such a wonderful, sweet, clever child she thanked Christ for every hour. Propping the bundles of clothes she had to wash in a protective circle around him, she set Jack down to roll and crawl and toddle, clapping her hands in warning each time he crept and waddled to the edge of the circle.
Her bare hands, Katherine thought with a sigh. She had sold her wedding ring nine days ago but the lack still smarted. If only Eric had not died. If only I had been more patient with him and not nagged him in our bed. That was a dark shame and secret of hers and one she still flinched from. If only my husband had kept his word and not kept all those secrets—
“Hey, Wash-tub!”
Katherine refused to flinch at the hated nick-name, or at the muddy, cold scrap of cloth that slapped down the side of her face. She caught it before it fell anywhere close to Jack and heard the braying order, “Big Aggie wants that washed tonight.”
She nodded and scooped a faintly grizzling Jack into a carrying sling. Where she would find wash-water at this hour was one problem, although at a pinch she could use her own urine and rinse the scarf in—what? Rainwater collected in a tree stump?
But she did not complain. Better to be bullied here than bullied and raped at the old house by my stepson. He was starting to pick on Jack, too. Eric had sworn he had made provision for us, but he did not. Secrets, always secrets. Remembering her own secret with a shudder, she picked up her pack and the washing bundles and moved farther back from the fires, preparing to do as Big Agnes demanded.

Spiteful fools, Valens thought, wishing he had his lord’s skill with poisons and could slip some to these chattering mares. To expect a nursing mother to leave the safety of the camp simply to wash a scarf spoke of a careless arrogance that made his blood boil. The girl and her babe would do far better with him. They do not deserve her.
He was so furious it was several moments before he could admit that their petty malice, to one of their supposed own, had made capturing his prize easier. The young woman was clearly seeking fresh water and had just found some in a moss-covered birch stump. She had placed Jack into a cocoon of bedding and was pounding the scarf on a smooth rock, stopping after each weary flick to glance to the distant camp and peer into the closer trees. Sure that his dark clothing, dyed black mop and dirt-smeared face would make him invisible, Valens slipped his sheathed knife from his belt into his boot—he did not want the girl trying to grab his blade and stab him—and waited. He moved as she did and squirmed closer to the baby.
Jack was gnawing his fist but content and eager to be diverted by the sparkling toy of a gold chain and crucifix, dragged by Valens across the rim of his circle of blankets. Gurgling, the baby obligingly tottered, then crawled on plump little legs after the pretty thing. Valens allowed Jack to grab the chain and picked up the baby, settling the child on his hip. Jack snuffled and stared up at him in wide-eyed wonder. He trusts me.
“Jack! Where are you?”
On her knees now, the woman was patting and throwing aside the empty circle of clothes, gasping in her panic. Valens loomed closer, sweating a little himself, though his voice was cool and low.
“Here with me. Shush.” He closed his other hand around his little mother’s thin wrist and yanked her to her feet, deftly releasing her and removing her eating dagger from her belt as she stumbled. She fell against him and he caught her again, winding an arm about her middle and snagging her against his body as closely as he cradled her son. Her mouth and eyes were as wide as Jack’s, but she did not scream. Her attention was altogether on another matter.
“No, Jack, not in your mouth.” She grabbed the gold chain and made a brave attempt to smile at her son. “Never something you could choke on.”
Valens released her wrist to sweep his dark cloak around all three of them. “I shall know that next time.”
“Give me my boy.” The wench reached for him but Jack nuzzled against Valens, who was in no hurry to release either of them. He leaned closer, keeping a firm hand on the baby.
“No.” Valens gambled on her not wishing to scare or hurt Jack by trying to wrest him free.
Her eyes glanced away from him and her baby to the camp. At a snap of his fingers, Sebastian’s two good men rose out of the undergrowth, taking a step closer. The woman moaned as she saw the chance of any possible escape diminishing to nothing.
“No help here or over there,” Valens spoke as if no other fate was possible. “You and Jack are coming with me.”
“Why should we?”
He liked the flash of temper. Anger meant she would not faint. This close, he saw her face for the first time, rather than her bent head or profile. He stared for an instant—he could not help it.
My little mother is a pretty waif. Not beautiful, he corrected at once, not with that grubby hair or sharp little nose, but her face was free of pox scars and had an open, impudent look. She had a narrow head and a thin mouth that curved up at the corners and green eyes that shone with fury, lightening them to the color of fresh beech leaves. He had done well for himself by her capture. To marry this will be no torment.
He inhaled sharply and smelled her sweet, milky scent, felt her turgid breasts press against his lower ribs. She was smaller, much slighter than him, but tucked nicely under his chin for all that. The realization slid through his mind as fast as an arrow bolt, then he was answering.
“I need your help.”
He had not meant to say that. He wanted to get her walking, get them farther into the trees, away from the others. “Come with me now. No trouble.”
He prodded her side with a finger and she jerked sideways, flinching as if she feared a dagger thrust. “I promise I will not hurt you or your boy,” he added.
“Such vows are easy to make,” she answered at once, reaching out again. “Give me my son.”
He prodded her shoulder. “Walk first.” He did not tell her there were horses nearby, one step at a time was enough.
Still the woman did not move. She stared at how he held Jack, balanced against his hip, and more suspicion flared in her face. “Why—”
I cannot waste more time on this. Edith is ailing. Valens scooped baby Jack into her arms and picked both of them up. Ignoring her instant struggles, he began a shuffling retreat, flanked by the two men. When the girl opened her mouth to yell, he silenced her by pressing his lips onto hers.
Refusing to acknowledge either the guards' knowing smirks or the blistering agony when the annoying, squirming, necessary wench bit him, he staggered deeper into the forest.
How had he ever thought this would be easy? Once I have them back at home, it will be.
He could only hope.

OUT NOW FROM BOOKSTRAND, AMAZON, BARNES & NOBLE AND OTHER SELLERS

Posted by Lindsay Townsend at 09:25