'Voices in the Dark' - romantic excerpt in Venice. 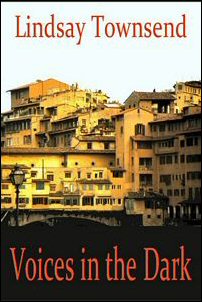 To celebrate the re-issue of my romantic suspense, 'Voices in the Dark,' here is a romantic excerpt where the hero Roberto and heroine Julia go to Venice.

Venice. Neither Julia nor Roberto had ever been to the floating city. Free of memories and ghosts, deserted by tourists in a day of freezing fog, Venice was theirs.
Leaning out on the Rialto bridge, Julia spoke their united thought. 'Glad we came.' Time, their constant harrier, glided like the mist gilded streams under their feet as they regarded each other.
They kissed on the bridge, the silver fog rising from the water hiding them and the city in a secret embrace.
'I wish we could stay,' said Roberto, when they surfaced a little from the kiss. Julia turned a dreamy open face sidelong and ran her eyes over him. She wanted this rippling quiet, this day of misted sun glinting on the tops of suspended marble palaces, to go on for ever. No more struggle for success no more troubles. No more Scarpia.
'I can't get used to you without that plaster cast,' she murmured, obliterating the world as she pressed her cheek against his chest. 'I like the suit.' Dark grey, classically cut, worn with eye-grabbing panache, the suit had been a revelation. She already had designs for borrowing the waistcoat. She hugged him tight. ‘You look great.'
'And you are truly gorgeous.' Roberto stroked a hand down her back. 'Why do you hide those legs?'
His hand, and even more his eyes were doing things to her.
'Shall we?' he said.
'Yes.'

They took a gondola. Paying the gondolier not to sing, they settled against the heart-shaped backrest, Roberto giving Julia his cushion. Whilst he chatted to the gondolier about the latest football scores, Julia trailed her fingers through mist to cold, silken, softly grey-green waters. Both were too aware of each other to need more than the lightest touch of their bodies, side by side as they floated on the cradle of Venice's canals.
Venice in a shimmering winter mist was as one of its more extravagant glass creations, cloudy and baroque at the base, its marble statues and wrought-iron house-grills looming through the mist like porcelain flowers stuck on Venetian chandeliers. Then halfway up the narrow buildings - just over the top of Roberto's brown spiky curls, Julia calculated - the mist thinned and sunshine dusted each white campanile.
‘We're here,' Roberto said softly. The gondola swayed against a painted landing post; a doorstep floated inches above the water. This was his surprise to her: a home, not a hotel, their own private place. He had booked it, along with a few extras, at Florence airport before they made their flight.
He opened the front door. The gondolier, paid and tipped, was gossiping into his portable phone about having met Roberto Padovano. ' . . . and you know he's really normal . . . great bloke . . . asked about the big match, you know, Roma versus Inter-Milan . . .'
Someone in the Romanesque palace opposite shook their shoes out of the balcony window. Hidden by a curve of buildings, muted by fog, two waterbuses honked as they passed on the Grand Canal.
Julia rose circumspectly to her feet. The last thing she wanted to do was spoil the moment, shatter the delicious tension by an ungainly lurch off the boat. In jeans and trainers she would not have thought twice, but high heels and a fitted coat were a different matter.
Roberto did not offer his hand but merely plucked her from the gondola, swinging her lightly off her feet into his arms. They entered the Venetian house that way, Roberto crossing the threshold carrying Julia. Closing the door on the grinning gondolier, he continued an unhurried advance to the bedroom.
'Didn't I see a piano as we whisked through the living-room?' asked Julia. 'And a log fire and a Christmas hamper?'
'You did,' answered Roberto, unbuttoning her coat, ‘This was once a composer's house. Now it's a luxury holiday home.' Slowly, he unfastened her shoes.
Julia closed her eyes as his strong fingers brushed her ankles. ‘Which composer?' she asked softly, as her high heels went skating across the mosaic floor to the big sunlit window.
'A German. He wrote many beautiful hymns - but then German is a spiritual language.' Spirit was not what Roberto was feeling at that moment. He swept her out of her coat onto the gold satin sheets.
Julia helped him to shrug off his jacket and loosen his tie. 'What kind of language is English?' she asked, her nimble fingers undoing his waistcoat as his hands deftly slid into her dress, dispatching the fastenings. Her fingers brushed warm flesh as his thumbs circled the engorged nipples of her breasts.
'Definitely pastoral.' Roberto's hands slipped gently between her thighs. 'Country matters.' As she gasped he kissed her.
Off came the rest of the clothes, in silent, feverish haste. The pleasure of seeing each other naked was to be fully enjoyed in a later, less urgent moment; now it was contact, the mutual desire for possession. They burned in each other's arms.
‘What about French?' Julia murmured several long moments later, fingers teasing an intimate caress. He was so firm, so good to touch; she wanted all of him.
'Intellectual.' Her hand guided. Her body enfolded. It was better than anything he had known before. Sweating, rigid in delight, Roberto forced himself to be slow.
Julia felt him moving deep inside her. The virtues of Spanish and Italian must keep. She kissed his throat. His arms tightened around her. The spikes of pleasure intensified as his hips ground against hers. She writhed beneath him. As he came he shouted her name. As she came she kissed him on the mouth.
For both, it had been worth the wait.

Grimsby Evening Telegraph:
She obviously has a passion for writing. This is a book you will not be able to put down.

Posted by Lindsay Townsend at 09:36