A Medieval Summer - a picture blog 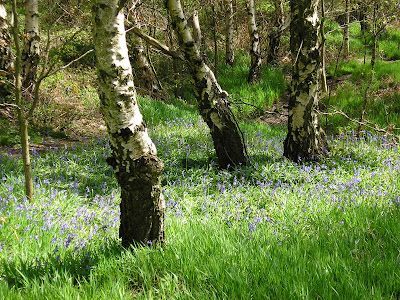 My latest historical romance, To Touch The Knight, takes place in summer, a tense summer just after the outbreak of plague in 1348, when people are trying to return to normal. 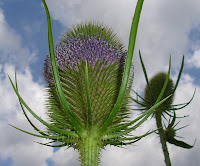 In more usual years, summer for people in the Middle Ages was both very busy and a time of relaxation and pleasure. After the hard graft of winter and spring, May was a holiday month in early summer, with few tasks in the agricultural calendar. May Day, a blend of Christian and older pagan traditions, was celebrated by everyone, with dancing, revels and drink.

May was the time when people would go wandering in the fields and woodlands, to enjoy the fresh greenery and woodland flowers. It was also blossom time, when the fruit trees and hedgerows burst into bloom, wild cherries and wild apples following each other in glorious profusion.

Later summer was a harder task-master: if a peasant worked on the land, later summer was when the sheep were sheared, then the hay and wheat harvests were gathered in. Summer, too, was often the prime time for military activity, when knights might be called to fight for their overlord or king on campaign. However, even in these months there was merry-making.

Midsummer was marked by bonfires, a pagan ‘left-over’ from the earlier festival of Beltane and celebrated in the Middle Ages as the saint’s day of St John. Young couples would sometimes leap over the midsummer bonfire for luck. Wells could also be dressed with flowers around this time – a relic of earlier water-spirit worship, and still carried on today.

July was marked by St Swithin’s day, when the strewings in the churches would be changed from the winter rushes and straw to the summer hay and sedges, and August saw the feast time of Lammas – loaf mass – to give thanks for the hard-won harvest.
[Photo of oxeye daisies and cornflowers by Colin Smith, photo of well-dressing by Bob Embleton, both of geograph.org.uk. The fifteenth-century stained glass harvesting scene is from the Victoria and Albert Museum. All three sourced from Wikimedia Commons.]

Posted by Lindsay Townsend at 12:50

What gorgeous, gorgeous pics. How I would love to live a medieval summer, the idealized version, of course.

The first flower pic, is that a thistle of some kind?

Hi Savanna - it's a teazel, used in the cloth industry to tease out yarn and cloth. They grow to over 5 feet in height and are wonderfully spiky. The bees and hover flies love the tiny purple flowers. It looks like the kind of flower a Klingon warrior would offer his mate.

I agree with you about the idealized medieval summer!

A teazel... I hadn't heard about those before. The color is beautiful and reminds me of the thistles here. Thanks for interesting info. I always find it amazing how folks in the past and present use plants. The spikes on the Yucca plant were used by the American Indians as sewing needles, and by the pioneers.

It would be a perfect flower to offer a Klingon woman. ~smiles~