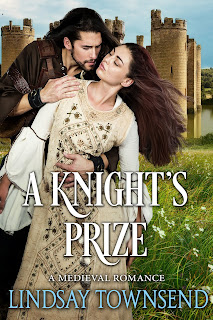 In "A Knight's Prize" my heroine Edith pretends to be an exotic eastern princess, The Lady of Lilies, to save herself and her fellow villagers from starvation after the pestilence (the Black Death, which struck England in 1348).

Edith is a peasant woman and blacksmith, but presents herself as a strange princess with her own seductive costumes, language and customs. One of my inspirations for this particular desperate deception was a real-life fake from the eighteenth century, the Princess Caraboo.

This ‘princess’ was a young woman who appeared in a Gloucestershire village in 1817, dressed in unusual clothes and speaking a strange language. Upon investigation by the local magistrate, it was discovered she called herself Caraboo and later a sailor claimed he knew her language and translated her story. Caraboo claimed to be a princess from an island in the Indian ocean, who had escaped after being captured by pirates.

The magistrate, Stephen Worrall, and his wife took in Princess Caraboo. She lived with them for several weeks, famous and fêted by the local community.

In reality Princess Caraboo turned out to be Mary Baker, the daughter of an English cobbler. When the hoax was revealed due to her picture in the 'Bristol Journal' being recognized, the Worralls arranged for Mary to leave for Philadelphia.

Mary did go to America but returned later to England and died there. It was the story of her unusual deception that inspired a 1994 film, Princess Caraboo and partly inspired my own novel.

Posted by Lindsay Townsend at 13:09

This is fascinating. I never knew about that (guess I didn't catch the film). The hoax sounds like a great idea, I'll have to look for the book.

I watched the film of princess caraboo. What a bizarre thing to do lol Good luck with your book.

Thanks, Lindsay - I do hope you enjoy my TO TOUCH THE KNIGHT, (I loved writing it.)

Thanks, Margaret - what a coincidence! Ta, too for the good wishes.

I saw the movie years ago, but never realized that it was a true story! Now I know- interesting- thank you!

Lindsay, fascinating. I wonder if it was just a straight hoax, or if Princess Caraboo had a head injury of some kind? Sometimes, that accounts for a change in personality and language... ?