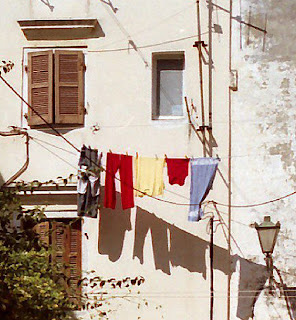 For me, research for writing is not so much a labor of love as a break in the flow of my story-telling. For Flavia's Secret I was researching ancient Rome, ancient Romano-British food, society, class, fashion, the city of Roman Bath and the baths themselves - I did the same kind of research on ancient Egypt for my forthcoming Blue Gold, too, beginning first with a visit to the children's library for lots of clear explanations and lovely picture-books).

Pictures and personal observation are what I find most useful in all my research. When I'm researching for a book, days are taken up with observation - noting people's gestures, the sounds and rhythms of their speech, the pervading scent of a place, the number of steps to a particular church. My husband is a keen photographer and takes pictures not only for himself but also for me: not only the battlements and arrow-slits of a castle for a medieval such as A Knight's Vow, but strange shots of dustbins and public telephones and kiosks and then, teasingly, candid pictures of myself, sunhat jammed over my eyes, head down as I take copious notes.

We repeated this in Rhodes as I researched the Dodecanese islands for my early romantic suspense book, Night of the Storm, and my novella, A Secret Treasure. The heroine of A Secret Treasure is an intelligent, sensitive young woman and keen cook in a high-pressure situation so I approached my research through Eve's eyes, noting how stark the contrast between shade and sun at midday, between the bustle and crowds of Rhodes Old Town and the pine-fretted quiet of Ancient Kamiros, where fragile orchids grow along the edges of the paths, learning how delicious grilled meat can taste, liberally sprinkled with fresh lemon juice and rigani, or how thorny and close-packed Greek heathland is.

Back home, the temptation is to use every scrap of my notes and then my writer's day is one of choice, because to put everything in would be fatal. My fiction is suspenseful, romantic, active: to stem the flow with a stodge of travelogue material would be a huge mistake - which isn't to say I don't commit such blunders! Usually then I spend a significant proportion of the next day taking out what I put in - a task which often inspires me to try even harder as I aim to get the most out of what I really love doing: writing.