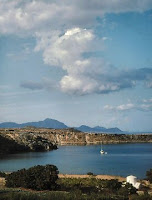 A few years ago I wrote a novella set in Rhodes in the Greek islands in the 1930s. A Secret Treasure is a light romantic suspense story which really only appeared as a large print title and went mostly into libraries. People who read it seemed to like it, so I'm pleased that Bookstrand have agreed to reissue it as an electronic title, due in October this year. I used Rhodes as a setting for two books, this one and the full-length Night of the Storm, so to see it coming back into print brings back happy memories of a sunny and hospitable island. (The picture on the right, by the way, is of Lindos harbour in Rhodes.)
Posted by Lindsay Townsend at 13:16